This is a complete performance of Schuman’s Three-Score Set, with each set played straight, and followed by several variations. The variations transform the themes in a variety of ways. The tuning is all scales derived from otonal scales in the tonality diamond to the 31-limit. The specific scales change frequently. In the scores shown below, you can see in the middle the otonal scale for each measure segment. 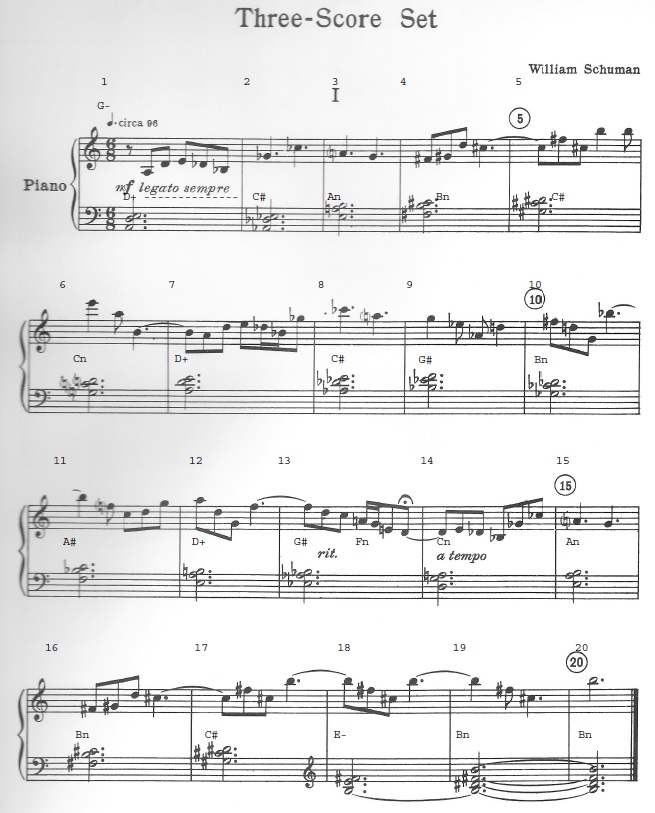 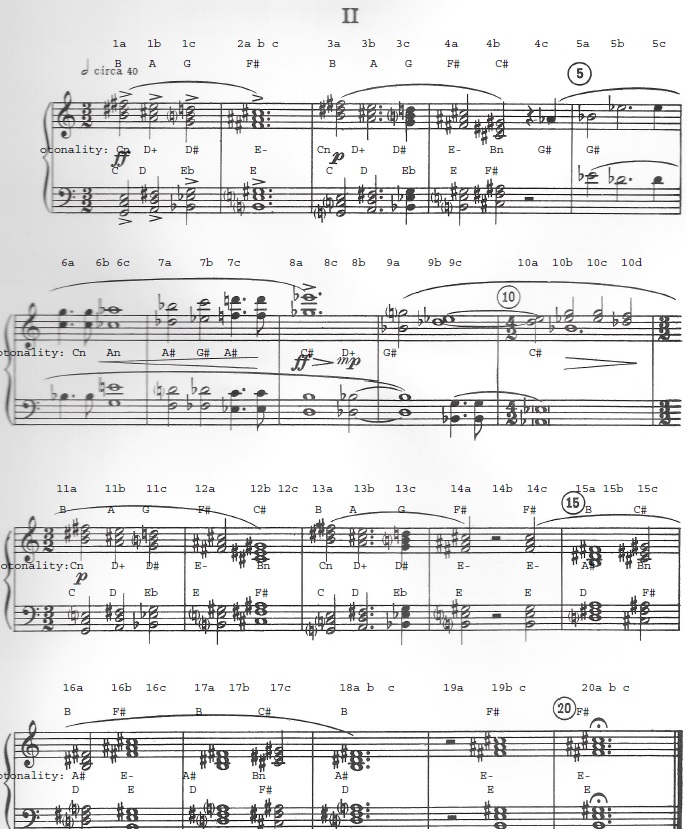 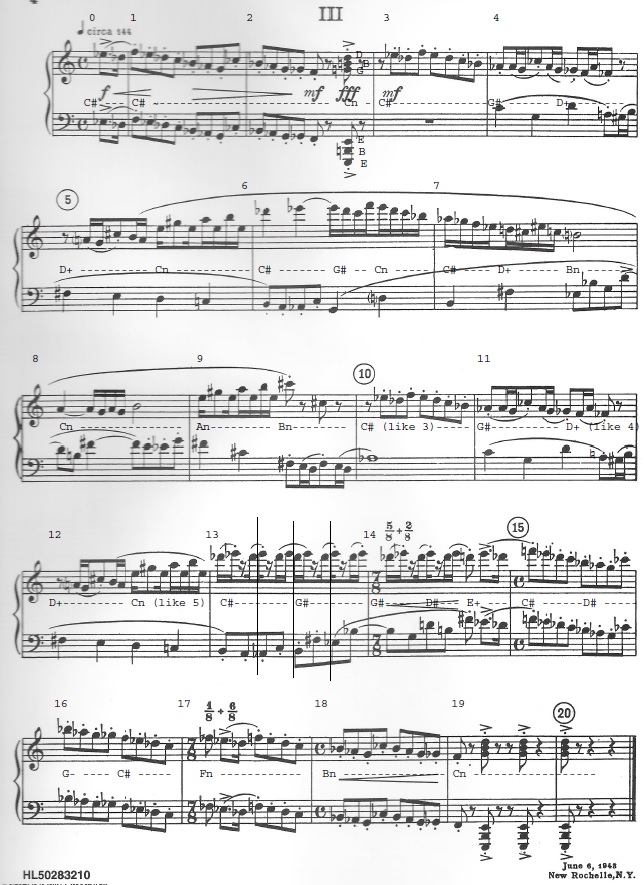 This the theme and a set of variations on set III from Schuman’s Three-Score Set. The theme is played straight. For the variations I take each segment of a measure and play it, then make many alterations to it quickly and comprehensively, then move on to the next measure segment. For example, I might play the first half of measure 2, then make changes to the tempo, rhythm, notes, and other characteristics, until moving to the second half of measure 2. And so on. So it keeps coming back to the theme, but intersperses variations as it goes on.

In the graphic of the score below, I’ve added the otonal scales for each segment. In measure 0, you can see the C#. That’s an otonality based on 16:15 above C. Then, the third part of measure 2 I switch to the 1:1 otonality. Measure 4 uses notes from the G# otonality, with G# meaning 8:5 above C, followed by D+, which is 8:7 above C.

There are many slides, usually from one note to the next in a sequence. Other slides are within a chord, as at the end of measure 2, repeated at measures 19 & 20.

This is another version of the set II from Schuman’s Three-Score Set, with variations. Each of the variations messes a bit more with the note order, duration, envelopes, octaves, dynamics, glissandi, and rhythms to create something progressively less like the original, until it’s almost completely unrecognizable. But the chords are the same throughout. It’s like a machine that destroys the material as it progresses. For this version, I shortened some of the variations, and included a repeating bridge between variations.

This is a more or less final version of the set II from Schuman’s Three-Score Set, with variations. Each of the variations messes a bit more with the note order, duration, envelopes, octaves, dynamics, glissandi, and rhythms to create something progressively less like the original, until it’s almost completely unrecognizable. But the chords are the same throughout. It’s like a machine that destroys the material as it progresses.

Today’s post is a very short trial run on variations on set 2. For now, it only includes the first two measures. They consist of four bitonal chords:

Each of the variations messes a bit more with the note order, duration, envelopes, octaves, dynamics, glissandi, and rhythms to create something progressively less like the original, until it’s completely unrecognizable. But the chords are the same throughout. My plan is to add more measures over time. 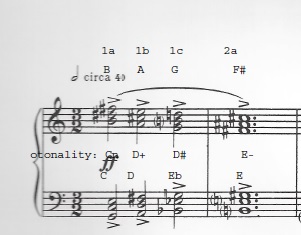 Today’s post is three variations on set 1. The first has minimal alterations, just tempo and glides. The second uses the Drunkard’s walk to wander around the set. The third is much more wide open, with notes taken from one measure and durations from another. 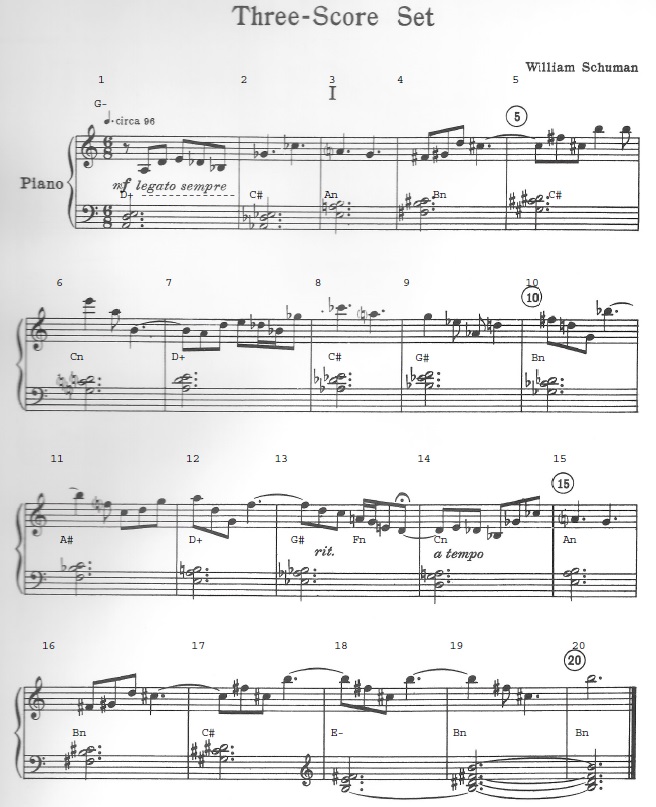 This is aother variation on set one. Lots of similar and dissimilar variations of each measure in the set. The order of the measures is backwards or forwards, with some Drunkard’s Walk, and some sequential.

This is a variation on set one, the 20 measure piece that uses fourth chords and a melody line. I stripped out the notes and the durations, then mixed them up a bit. I’m still working through the material here.

This is much like yesterday’s version. I increased the volume a bit, so it’s now using some louder samples in the Bosendorfer sample set, and I’ve changed my own source code to make it simpler to modify going forward. I plan to play with the durations and the pitches a bit next. 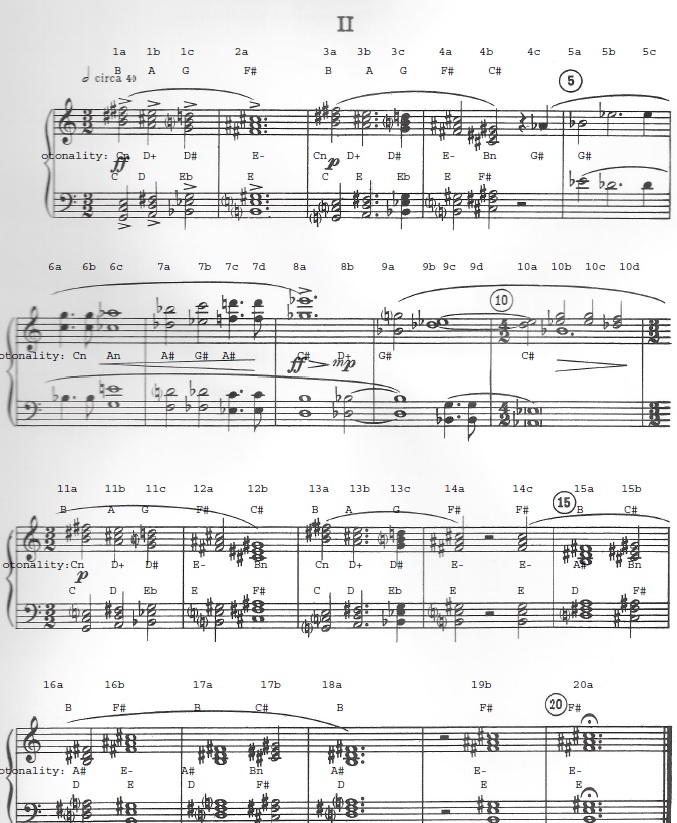