Today’s edition includes a new finger piano part, and more repeatability in the indeterminacy. Each instrument picks a random part to play for each 6/8 measure. If it doesn’t pick the same measure as it did before, it picks another random choice, among the 8-10 to choose from. If it tries 5-6 times and still picks a different one from the last time, it plays the new one. In this way, the piece tends to repeat each measure for a while, then change, after repeating itself a few times. This is one of several algorithms that I can use to tweak the indeterminacy.

Today I made some additions to the oboe part – more notes, and to the finger piano bass – the use of an exponential envelope with a fast bass line. Clipped and sharp.

The balloon drum is a 3″ sewer pipe with a balloon membrane head. The head is struck with a short rubber covered mallett. This version is a single 48″ model, sampled and manipulated with Csound. Also on the track are finger piano, flutes, oboe, and guitar. The notes are the otonality on C. 8:9:10:11:12:13:14:15:16. More later.

I started this off when Christopher Bailey talked about trying to compose something for his least favorite chord, the C-G-C# triad. He asked if there is a tuning that could be based on this, and several microtonal theoreticians came up with some ideas. I explored how the Partch Tonality Diamond, taken to the 15 limit, has many instances that approach this triad.

For example, the following three notes chords are variations on his triad:

They all have a different feel, but they all include close approximations of the chord.

The title is taken from the recent trial in Spokane, WA, in which those who lived downwind of the Hanford Nuclear Reservation and sought compensation for thyroid cancer. They won a Phyrric victory, when the damages awarded were far smaller than their legal costs.

Starting in 1944, the Hanford Reservation in central Washington produced Plutonium for nuclear weapons, including producing the components for the legendary “Big Boy” atomic bomb that was dropped on Nagasaki on August 9, 1945, to hasten the surrender of the Japanese and end World War II. It continued to do this for many years to support the cold war arms race.

Because of the war-time rush, the Hanford plutonium plants processed the irradiated fuel without allowing the radioactivity enough time to decay. For still unknown reasons, Hanford kept processing this very radioactive fuel even after Japan surrendered. As a result, vast quantities of pollution, especially iodine-131, were discharged into the air. In 1945 alone, more than a half million curies of Iodine-131 were released. The accident at Three Mile Island was estimated to have released about 20 curies. People were exposed to the airborne radiation by breathing the air and consuming certain foods, especially milk from goats or cows that grazed on contaminated vegetation.

Those who lived “downwind” of the plant have been seeking compensation for their losses, including cancers and related injuries. Those who claim harm have taken their case to court, and won a partial victory. They won several counts, but their monetary damages were far less than their legal costs.

I have enormous sympathy for the victims of this tragedy. The contractors were caught between their drive to quickly produce components for a weapon that could end the war and save the thousands of lives that an invasion of the island of Japan would cause, and safety. Safety lost.

Today’s excerpt takes the retrograde of a counter theme and appends on the primary theme played by the guitar. The ending is a spring glissando up and down simultaneously. Here’s a picture of the spring. 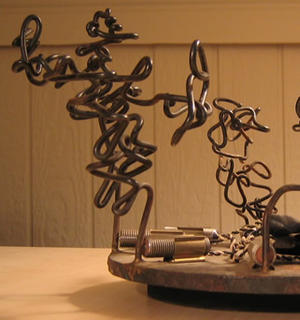 It’s made of .080″ piano wire (very thick tempered steel wire), which is bent with a pair of plyers and a blow torch into interesting shapes. The wires are then brazed onto a steel plate, and magnetic transducers are attached to pick up the vibrations. Csound is used to glissando up and down. Here’s the function table that goes up, and the one that goes down:

Then in the orchestra, the following code moves the pitch of the sampling synthesizer:

There is more in the Csound code on my web site if you’re interested. loscil is the key to a sampling synthesizer using Csound.

This is a work in progress…
Today’s contribution is the retrograde of the original melody.

This is a work in progress… Listen to what I did yesterday.

Welcome to the Carnival of Music. Thanks to John for letting me play host this week. Welcome to Bumper Music. I’m a composer seduced into capitalism, and this site is where I post each day’s work as a podcast, usually about 30 seconds at a time. Ten minutes a day, four pieces a year.

On to the Carnival of Music #7!

Fred Himebaugh found a disk jocky at a classical radio station with an impossibly impressive resume.

The HeadGirl made an investment in the clearance aisle at WalMart, and has benefited from it ever since.

John Lanius has discovered a great site for lovers of vintage synthesizers by EMS. Click the pix to enlarge.

Scott Spiegelberg nominated a series of posts on teaching music theory: Kyle Gann’s at PostClassic, Marcus Maroney’s blog, and his own at Musical Perceptions.

He also recommends two posts by Hucbald on composing fugues here and here.

And a post at Utopian TurtleTop about Ringo’s drumming and Sheryl Crow as inheritor of Beatle-glow.

All over the map today!

With so few submissions to the Carnival this week, here are a few links to sites that I think other musicians might find interesting:

On my blog today, I point to some work that Richard Boulanger and his team at Berklee and csounds.com are doing. They assembled an enormous archive of electronic music compositions that were created using Csound. For those who like electronic music, hand crafted with the software descendent of Music V, I suggest a few hundred hours of uninterrupted listening.

MoistWorks is an MP3 blog, which you can turn it into a podcast with this feed. Then every MP3 they post will show up on your MP3 player or iPod automatically. I wonder why they didn’t think of that before? They have an Atom feed, but that doesn’t support podcasting. Feedburner turns it into an RSS 2.0 feed required for podcasting.

Alex Ross, music critic for the New Yorker is on holiday, and recommended the following music blogs to read in his absence. Here’s his list:

Richard Boulanger and his team at Berklee and csounds.com have created a terrific archive of electronic music compositions created using Csound. For those who like electronic music, hand crafted with the software descendent of Music V, listen to M3U streams of the concerts here:

This is a magnificent collection for anyone who has every touched a synthesizer, tape machine, microphone, or seen someone do it. Listen and learn from the experts. Most of the pieces have source code you can hunt for on the web to show how the masters work. Richard’s book The Csound Book is all you need to know to get started. From his bio we learn:

Richard Boulanger rboulanger@berklee.edu was born in 1956 and holds a Ph.D. in Computer Music from the University of California, San Diego where he worked at the Center for Music Experiment’s Computer Audio Research Lab. He has continued his computer music research at Bell Labs, CCRMA, the MIT Media Lab, Interval Research, and IBM and worked closely for many years with Max Mathews and Barry Vercoe. Boulanger has premiered his original interactive works at the Kennedy Center, and appeared on stage performing his Radio Baton and MIDI PowerGlove Concerto with the Krakow and Moscow Symphonies. His music is recorded on the NEUMA label.

Currently, Dr. Boulanger is a Professor of Music Synthesis at the Berklee College of Music where he has been honored with both the Faculty of the Year Award and the President’sAward. He has published articles on computer music education and composition in all the major electronic music and music technology magazines. Most recently, Boulanger edited a definitive textbook on computer music that was published by The MIT Press entitled: The Csound Book