This version is much tighter now, and I think it’s finished. The hymn tune was written by Martin Luther in 1529, and harmonized by Bach in 1740 or so. This version stretches each chord in a variety of ways. Each chord can be 2, 3, 4, or 5 times longer than normal, and is repeated 1, 2, or 3 times before moving on to the next chord. There is a variable repetition scheme that includes stepping through the choices of arpeggios in sequence, forward and backward, and staying put for a while. The tempo shifts constantly, as does the volume.

The intonation system is chosen from the 72 EDO scale. The notes include the following: 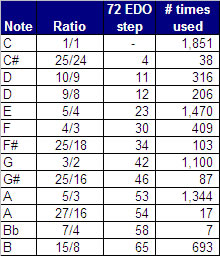 Notice how many more times C, E, G, and A are played. The two D’s are less than half as common, and that lonely 7/4 is only played 7 times. See if you can hear it, towards the end.

Here is a link to a nice PDF of the file on the Center for Church Music site. It’s not the one I used, but it’s close.