This is a piece that relies on several different Drunkard’s Walk Markov chains, some sequential, some that skip over every other note.

The title is a weather term for the frost that forms on the windward side of trees in the mountains caused by freezing fog and snow.

The bridge includes a sort of circle of fifths:

The bridge sometimes only uses the last three, four, five, or all six of the chords. I’ve used this bridge before in some pieces. It has a nice cadence at the end, G minor, C major, F major. The chords before those are pretty far off from a real circle of fifths. More like a broken wagon wheel of 5ths. In the chart below, the column ideal is the number of steps in 72-EDO that the note should be. Next to it are the notes actually used, and the difference between the number of steps between one note and the next. 30 is what it should be, a fourth up the scale in 72 EDO. Ignore the first one, 64. The rest are close but not quite 30 steps up. 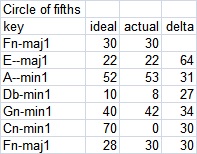 The tempo shifts around a bit, never staying the same for very long, but generally keeping around 65 beats per minute.