This is the final version of the piece. I’ve made a few small changes to the durations of some of the long and short notes. The long half notes can now end a bit early, leaving some space in the sonority, and the short mallet instrument notes last longer.

As I said when I started this hymn, the intonation I’m using is not attempting to be historically accurate. Dear JS would roll in his grave at the heavy use of the 7/4 ratio, for example. There is no evidence that he ever considered the interval in any way useful or musical.

I chose ratios with the single goal of using the lowest possible integers in each chord. Take a look at the first phrase below, where I use two different ratios for the tenor Ab, first 8/5 in chord number 3, then 14/9 in chord number 7, 3 72-EDO steps down: 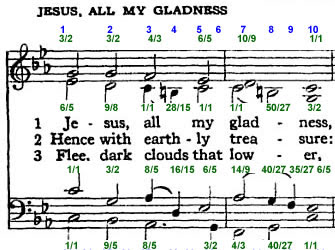 In chord numbers 8 & 9, I switch from G on 3/2 to 40/27, in order to harmonize with the D 10/9, which was forced by the chord number 7. No sane composer would have a melody haphazardly change from one version of a note to another in a melody. But when you slow everything down, it makes sense harmonically. At least to me.

I used a spreadsheet to multiply all the ratios in a chord by all the other ratios, and then minimized the integers inside the chord. See the following chart for the first ten chords. Click it to make it bigger.