This is a final version of the piece I’ve been working on lately. As with several recent works, this one takes six notes at a time out of a 10-note scale based on the undertone series. Here is a small chart that shows the pitches and ratios used and the order of the changes. The accidentals are in the Sagittal font.

The six notes chosen are two triads. The first one in the first row is a just B flat major, played at the same time as a just C minor. This is a very consonant combinations, almost too sweet. The instruments play a melody and chords based on those two triads. The rhythm is 9/8 then 4.5/8, which is what makes the tempo sort of bouncy. After playing in the first key (Bb major, C minor), it moves to the next one in the series, a just G minor combined with sort of an A flat neutral with a messed up 5th. It gets worse from there. Eventually it comes back to the beginning, and then repeats the cycle two more times. It’s the same basic melody and harmony in each chord, but the notes change with each change of key. Sometimes it sounds sweet, other times more challenging to the ear. Here is the full ten note scale, as I approximate it in 72-EDO: 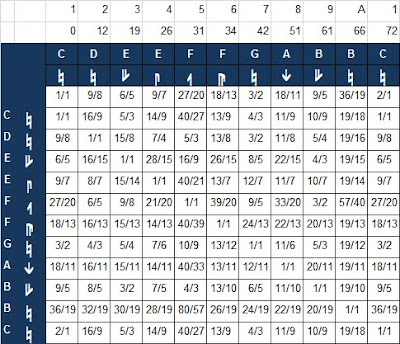 The instruments are trumpet, trombone, french horn, cello, and tuba playing the melody, and bassoon, clarinet, oboe, and flute on the harmony, with a rhythm section composed of balloon and tube drums.