Here’s a variation on the theme of the Aria from Bach’s Goldberg Variations. It’s not like his variations. I take the notes in each measure of the Aria and load them into an array, and allow the preprocessor to choose the ones it will play from the list using a randomization scheme. I apply another randomization scheme for the durations, and a third to select whether or not a note will play after it’s been chosen. There are a wide variety of different envelopes that can be applied to notes, and variations in the density, and other factors. The result sounds kind of like an ambient piece that Harold Budd might have improvised, if he had access to Prent’s Microtonal Slide Bosendorfers.

My plan, which as always is subject to success or failure of the idea, is to take a few measures of the Aria at a time and find a variation that brings out the harmonies and with potential extensions of the tuning into higher ratios. Variation one works only with the first eight measures, and I’ll see what the next one will chose from. 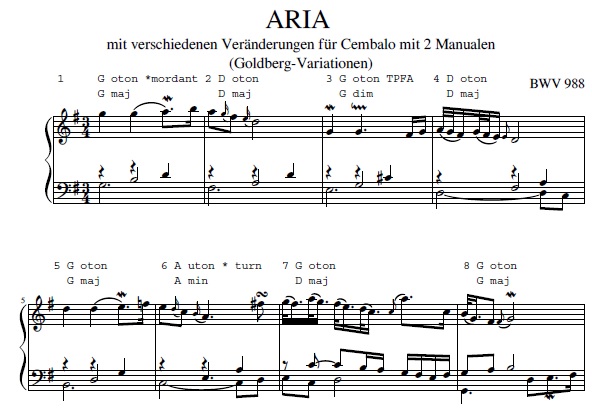