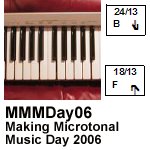 In part two of the Microtonal Music Day 2006 podcast, we’re going to hear from 12 more microtonal composers, in another feast of microtonality. As I said in yesterday’s installment, this podcast is a result of the efforts of dozens of composers and musicians who feel that microtonal music deserves wider recognition. The idea was hatched on the Making Microtonal Music Yahoo Groups mailing list, and has grown thanks to the efforts of that group. The idea is to pick a day, and just “flood the zone” with microtonal music, compose, play, share, and get someone to listen to microtonal music. Of course, we should do this every day, but today is an opportunity to really focus. Think of it as the black history month for microtonality.

First up is a piece by Rick McGowan which he calls:

a “Five Minute Symphony in 15-tet” consisting of 3 short
movements. It is realized with Garritan Personal Orchestra with
microtuning courtesy of Fractal Tune Smithy.

Of course the tuning is 15 tone equal. It’s scored for a small orchestra
consisting of winds & brass in ones, piano, and strings.

As with almost all of today’s microtonal composers, Rick uses a computer to control the pitch. Others in today’s podcast use Csound, and other programs. When performers are able to play in tune in these challenging intonation systems, perhaps we can hear more live performances. But until then, we have the computer realizations.

Next up is Rosencrantz the Sane with the “Nothing of any Importance Suite”, created especially for today. He writes:

Blurb: Here’s a bit of MACROtonal music for you all. The Tonalsoft encyclopedia lists 5-EDO as “the smallest cardinality EDO which has any real musical usefulness,” And that sounds like a challenge if I ever heard one. 2 metallophones and a flute, in 4-EDO. Public Domain. 55 seconds long.

Throwing down the gauntlet, I’d say. Here is the only 4 tone equal temperment piece in the known repertoire, Nothing of any Importance Suite by Rosencrantz the Sane.

The next piece was submitted by Yahya Abdal-Aziz, who brings a rich heritage of Middle Eastern tuning systems to his composition. The piece is called “Bunga Seroja”. This performance is a collaboration between Yahya, who wrote the music, and John Lyle Smith who performed it. Yahya writes to offer his music to the group:

I have the pleasure to announce a tiny submission, my arrangement of a traditional Malay tune, performed by Jon L Smith and his Electric Light Orchestra (and with a subtle, slight imperfection inserted by myself, since as we all know, it is the height of hubris for mere mortals to believe they can attain to perfection in any sphere).

Next up is a piece by the person who started the Making Microtonal Music Yahoo Group, to stimulate the creation of microtonal music. Jon Szanto is a percussionist and composer, who played in the Partch ensemble back in the 1970’s. He maintains a terrific web sites on Harry Partch, called Corporeal Meadows. Jonathan had this to say about today’s Make Microtonal Music day submission:

I thought, no matter how bad things are, how could I pass by a day in honor of the music of the very list I helped start? It would be churlish and desultory, and what better reason to stay up until 4:30 in the morning? (not to mention that I spent the earlier part of the evening accompanying Marvin Hamlisch. I keep wondering: what did I do in a previous life to deserve this?)

OK, so we have just a couple minutes of cruft entitled “Do Something”. I figured I’d stick to that theme. A few musical and aural clues in there as well. When I’ve had the rare time to sit down and play, I’ve been living inside of one of Al-Farabi’s scales, the Greek genus chromaticum forte. But I decided to fill out 12 notes, and utilized Kyle Gann’s chart to find likely candidates for an interesting – and decidedly non-ET – grouping of pitches.

Now listen to “Do Something”, by Jon Szanto.

The next piece we will hear is actually three fragments by Bill Sethares, using a digital signal processing synthesis algorithm he is exploring. These works in progress are described by Bill as follows:

For these examples, I decided to use some multiphonics from a clarinet as the “field.” Then, the “melody” is a solo clarinet played over this field, and adapted. Already there are some interesting sounds. Perhaps most obviously, the “clarinetness” of the melody is compromised — sometimes there is a hint of it, but often it is annihilated. Why is this? The essence of clarinet-sound is the alternation between large and small harmonics — the large being the odd harmonics and the small being the even. In the mapped sounds, the large-small pattern is retained, but they no longer occur on the harmonic series (rather, they are moved towards the partials of the multiphonics, which are inharmonic). Apparently, this is enough to compromise the “clarinet-nature” of the melody in most cases. On the other hand, it still has the character of some kind of melody.

In the spirit of works in progress, I now offer two of my fragments from a piece I am composing for brass quintet. I recently began working in Csound with some musical instrument samples from the University of Iowa Electronic Music Studio. I started with the brass section fortissimo samples, which have a different sample for each of 12 tones to the octave. This piece uses tuning based on the Partch tonality diamond, raised to the 15-limit. You will hear two fragments, one slow and one fast. It’s called, tentatively, Trumpet Song, by Prent Rodgers, which is me.

Magnus Jonsson & Jim Redfern collaborated on the next piece we are going to hear, “Anticperience”. Magnus Jonsson is a 25 year old composer born in Sweden, now a student at the University of Delaware, USA. He writes to describe the work:

Here’s a piece I and Jim Redfern made. It very much resembles 80-ies early techno. It’s most prominent microtonal feature is that the root moves between 1/1 and 8/7 throughout the piece. It’s just intonation through-out. We used a 24-note scale consisting of a 7-limit Partch diamond plus a few extra 7-limit superparticulars to 1/1…

Listen now to Anticperience by Magnus Jonsson and Jim Redfern.

Next I’m going to play a piece by Jon Lyle Smith called Wind Rider. We heard another of Jon’s pieces in yesterday’s Make Microtonal Music podcast. He describes this work here:

I wanted to explore a monophonic, melodic use of tense intervals. Using 9 out of 12 pythagorean pitches, I was able to vary melodic steps from 70.7 to 160.8 and 203.9 cents, and thus vary melodic intensity as well. The soundfonts used were flute, oud, saz (Turkish lute), talking drum.

Gene Ward Smith is a frequent contributor to the theoretical and music making microtonal list services. He has an encyclopedic grasp of tuning theory, and is always helpful to new composers wishing to explore the microtonal world. His pieces focus on the motion through a set of keys, and the gaps between keys that are opened up when you allow pitches to go where they might, and ignore the constraints of 12 tone equal. He describes the next piece as follows:

In the movie The Pink Panther Strikes Again, an insane Inspector Dreyfus escapes and terrorizes the world before accidentally disintegrating himself with his own death ray. As he slowly dissappears, he plays the organ. This is my idea of music appropriate to such a condition; it is in the Octoid[72] scale, 72 notes out of 224-et. To quote from the film, “What is the price of one piano compared to the terrible crime that’s been committed here?”

I only have time today to play the first four and a half minutes of the seven minute piece. Go to Gene’s site to hear the whole thing. Listen now to an exerpt from “Inspector Dreyfus” in 72 out of 224 equal temperment.

Next we will hear Hans Straub’s performance of his piece “Asimchimsaia”. He describes it:

It uses a 5-EDO scale, i.e. one octave is split into five equal parts. Besides, the meter is 5/8. As result, there is a far-going symmetry between time and pitch component, which gives me a number of slightly crazy mathematical possibilities to vary motifs, such as arbitrary two-dimensional transformations applied in the way that classical composers use inversions and retrogrades.

The piece is a nice contrast to Gene Ward Smith’s 224 equal temperment. Here we have 5 tones to the octave. There is after all, a whole world between the 1:1 and the 2:1. Hans Straub’s “Asimchimsaia”.

Jacob Barton tuned his synthesized keyboard to 14 tone equal temperment and improvised one evening. This hyperimprovisation resulted. He describes it:

Jacob Barton recorded an improvisation in 14 tone equal tuning and was struck by his luck in hitting so many tasty chords. This rendition is at twice the original speed, where many of the rhythms feel more “right” to him.Play clip.

I recorded an improvisation in 14-equal on Sunday, and played it back at 2x speed, and it’s been stuck in my head ever since. Especially annoying while I was trying to compose on Tuesday for two clarinets a sixth-tone apart, which can’t really accomodate 14-tet very well. But there are some very catchy progressions in there, and afterwards I realized that I managed to base much of it on the same motive, a sort of +1 -2 motion.

The question is what to do with it now. Can some of the material make a good foundation for other pieces, or is it too organic to be broken up? Would it be useful as a solo piano piece somewhere remotely close to that tempo, which gets insane in a few spots?

The final piece today is by Jeff Harrington. Spirale d’Arco for Sax Quartet was originally written for string quartet, but Jeff made a saxophone realization using sound synthesis software. He describes it on his web site:

While in the middle of composing a saxophone quartet, I spent a little time listening to how some of my chamber music sounded through the lens of a sax quartet and became very intrigued and then obsessed with how my [listen] 4th String Quartet, Spirale d’Arco sounded as one. As a result, in the past 48 hours I’ve dedicated myself to an arrangement of that piece for that ensemble and I think the results are fantastic. The tunes and fiddling of the piece, have become transposed into a funky and wonderful type of saxophone energy.

That’s it for now, podcatchers and microtonalists. For more information on the events of the day, please see the wiki site here. Happy Microtonality!