This piece is pretty much finished now.

Winding out to the Pacific is the second to last piece in the Music of the Hoh River Valley series. This one is scored for vibraphone, marimba, harp, finger piano, and sine waves. The intonation system is 72 equal divisions of the octave. There are four chords derived from four scales used throughout the piece, and they are played in succession:

This sequence is repeated three times. These four scales are derived from the Partch tonality diamond to the 15th limit. Click on the images below to make them bigger. 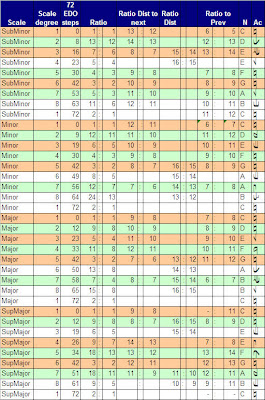 The orange rows are the primary notes of the scale, making the major or minor sounding chords. Green is for the alternative chords, and white are the really strange ones. I construct fourth chords from these scales, and either play the chord outright, or arpeggiate it up and down. The fourths are constructed starting at the 7th note of the chord in the bass, and going up by approximately 30 steps of the 72 EDO, attempting to go up 60 steps every other note until it repeats. Here are the scale degrees of the fourth chords for each scale.

The piece uses indeterminacy heavily. Each instrument has a set of choices for what to play. In this version, the choices random, but weighted towards not picking a choice if it has already been played before.

This version is the 17th run through the algorithm. The 12th and 13th are nice as well, and I might post them some time.

The length of time to stay on one of the four chords is variable from one to eight measures, also chosen with a weighted random selection method.

The tempo is continuously variable, but it tends to go faster on those chords that are played more measures, and slower when the number of measures is low. The transition from one tempo to another is gradual. Here’s a nice picture of the mouth of the Hoh River as it enters the ocean, about 56 miles from its source. 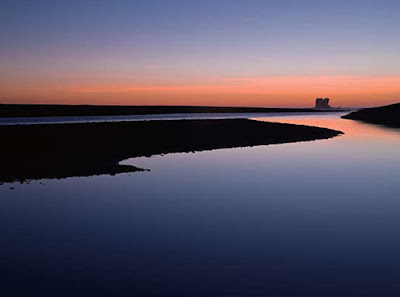