This is completed version of the final piece in the series “Second of July”. This one is scored for Flutes, Baritone Guitars, finger pianos, balloon and tube drums, and dry scratching samples from an instrument I built in the 1970’s for live performances. The tuning is Adams-12, which is twelve tones from 72-EDO. I use the following six note scales:

Think of it as in C major, with a bridge that goes through E minor, A minor, D minor, G major, back to C major. And throw in an occasional F major to shake things up. There is a melody of sorts, that is first played against the C major, then against bridge minors, using the tones that most closely match the C major tones.

The selection of what each instrument plays at a given moment, the next best action, is determined by the Markov Chain Drunkard’s Walk algorithm. They can pick the next choice, or the previous choice, but they can’t pick what they picked the last time. If there are six alternatives, the next one is chosen from those six using the algorithm. But I pick the six alternatives. I exercise a great deal of control, but when it’s time to play, I leave the final choice up to the randomizer.

Your browser may not support the audio element.

The title to this and all the Second of July series is from a letter from John Adams to his wife Abigail on the occasion of the approval in the Continental Congress of the Declaration of Independence.

The Second Day of July 1776, will be the most memorable Epocha, in the History of America.
I am apt to believe that it will be celebrated, by succeeding Generations, as the great anniversary Festival. It ought to be commemorated, as the Day of Deliverance by solemn Acts of Devotion to God Almighty. It ought to be solemnized with Pomp and Parade, with Shews, Games, Sports, Guns, Bells, Bonfires and Illuminations from one End of this Continent to the other from this Time forward forever more.
You will think me transported with Enthusiasm but I am not. — I am well aware of the Toil and Blood and Treasure, that it will cost Us to maintain this Declaration, and support and defend these States. — Yet through all the Gloom I can see the Rays of ravishing Light and Glory. I can see that the End is more than worth all the Means. And that Posterity will tryumph in that Days Transaction, even altho We should rue it, which I trust in God We shall not. 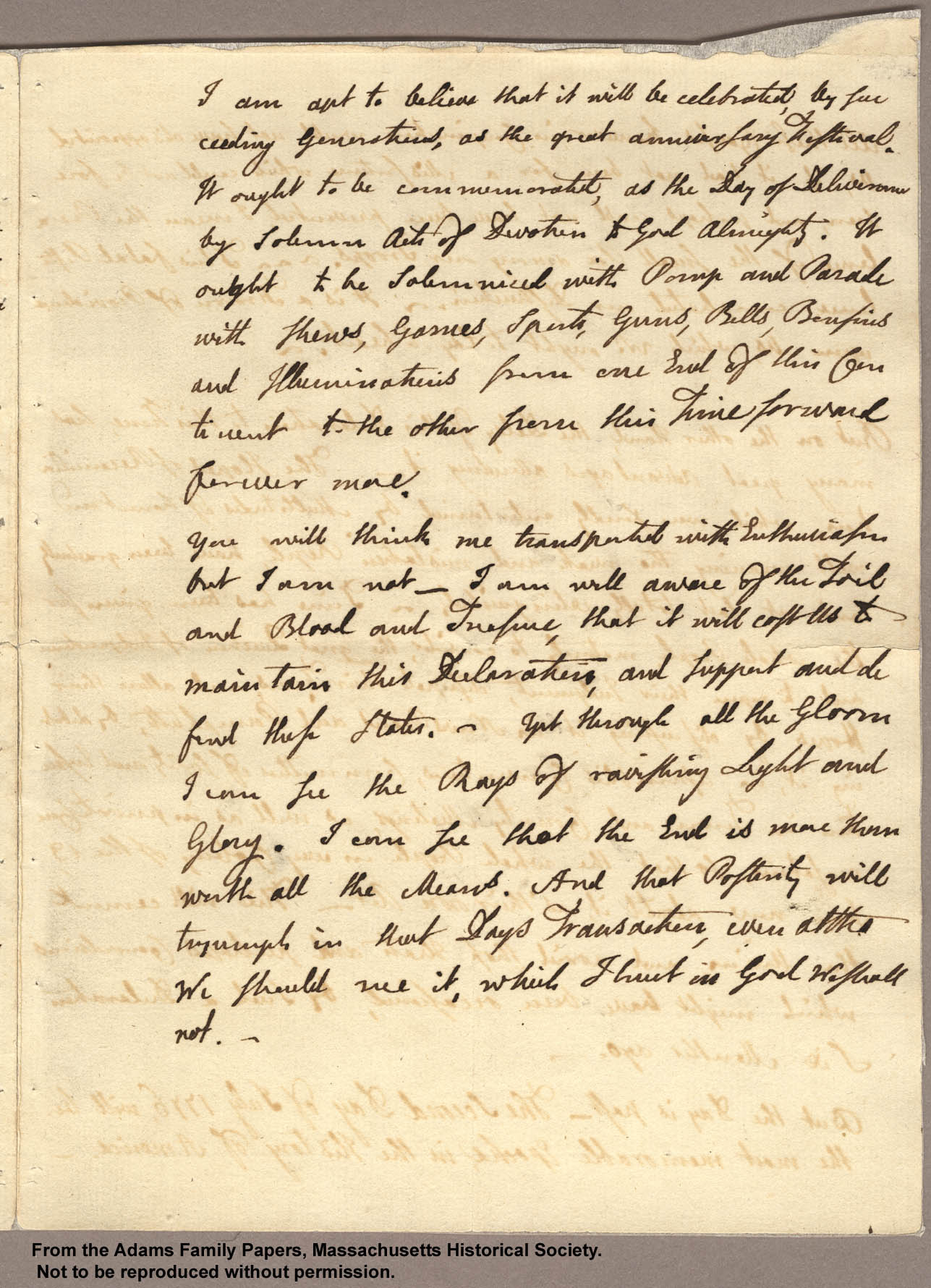