This is another fantasia on the output of the coconet Deep Neural Network Model, scored for a primarily percussion ensemble. I fed a real chorale into the model, with the exception of one of four voices, and it predicts the missing voice. I repeat the process until I have 4 chorales all made up by coconet. I then manipulate the chorale using python functions.

An important factor in the way coconet processes the input data, is that is starts with a MIDI file, but immediately translates it into a piano roll structure. The piano roll consists of 32 data points representing notes that are played by each of four voices during a four measure, 32 1/16 note intervals. If a note lasts longer than a 1/16th note, it appears in the next time step. The note ends when a different note appears or a zero appears in a subsequent time step.

For example, here is the first four notes of Bach’s chorale, “O Haupt voll Blut und Wunden”. This is used in several sections of his St. Matthew Passion. I know it in English as “O Sacred Head Now Wounded”.

Each time step is equal to a 1/16th note. The first is the representation in MIDI note numbers, the second is translated into note names. 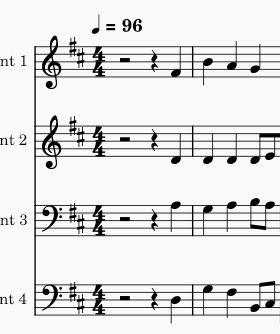 So even though a note appears in the time step, it may not be played. Instead the machine knows that if the note in a voice doesn’t change, it holds the note instead of striking it again. The convention in piano rolls is that if a time step in a voice is 0 then that ends the note. If I pass a mask of zeros at locations in a matrix against the piano roll, it turns held notes into arpeggios. I discovered that by mistake as I was playing with the data. But I soon began exploring what matrices could produce the most interesting results.

As before, I searched for those time steps that contained notes not in the root scale of D major, and then extended their duration by 5, 10, or 15 times so that they were heard much longer than the time steps that only contained notes in the root scale. This had the interesting effect of lingering on the passages in the chorale that contained a different key, suspensions, or diminished chords.

This version uses some of my favorite instruments from the music I was making five years ago: harp, classical guitar, marimba, double bass martelé, xylophone, piano, vibes, and bass finger piano. These eight instruments start all playing, then over time they form groups of four, five, or six instruments, until they all come back together at different times.

The tuning is Victorian Rational Well Temperament in C, which seems to work well with the D major that this chorale is written.